Are you ‘stuck’ with PCOS?

So are the people trying to help you too.

Your ovaries should recycle your unused eggs. if not, your hormones can unleash a storm of problems.

researchers call for a ‘multidisciplinary approach’ to treatment, yet no-one seems to be doing it.

does traditional herbal medicine have something to offer?

Polycystic ovarian syndrome (PCOS) is the most common endocrine disorder affecting 16.5 % of women (1). Diet, exercise, and a 5% -10% weight loss can restore normal ovarian function and hormone balance for obesity-related PCOS (2). A surgical technique developed in 1935 created the first pregnancy for an otherwise infertile woman with PCOS (3).  95 years later, after thousands of published studies, symposiums, and two international consensus forums later, there is still no cure for PCOS (4). A botanical formula for the treatment of PCOS was first published around 200 A.D. in China and has been used ever since (5). Could modern patients benefit from this ancient wisdom?

Alternative medicine has been emerging as one of the commonly practiced medicines for different health problems, including PCOS (6).

Despite the widespread use and practice of western medical treatments in places such as Taiwan (7), patients there, newly diagnosed with PCOS, had a relatively high tendency (89.22%) to consult Traditional Chinese Medicine practitioners for herbal medicine treatment over modern medical options (8). What do these women know that women in other countries do not?

Women seek treatment for the same PCOS problems all over the world.

A syndrome is a recognizable complex of symptoms and physical findings that indicate a specific condition for which a direct cause is not necessarily understood (9).

PCOS appears to be inherited as a complex disorder in which several genetic variants are present, all contributing together with lifestyle and environmental effects to the manifestation of the disorder (10). Because PCOS reflects multiple abnormalities, there is no single drug that can treat all its symptoms (11). The search for the single unifying theory to this disorder will hopefully yield the single best treatment, but this quest remains one of the Holy Grails of reproductive endocrinology (12).

A simple solution to this complex problem remains elusive.

Despite the growing incidence of this syndrome, limited research has been done that encompasses the entirety of the PCOS spectrum (13). Infrequent periods, male-like hair growth, acne, and obesity, along with more than 20 antral follicles seen per ovary are symptoms of the syndrome (14). Insulin resistance (50% – 90%) and excess body weight (38% – 88%) play a central role in the cause and development of PCOS (15). Increased incidence of infertility, diabetes, mood disorders, cancer, and cardiovascular disease are associated with PCOS. (16).

In terms of a treatment overview of women with PCOS, the following suggestions (Level A) have been proposed in the first Royal College of Obstetricians and Gynaecologists guideline, which might be beneficial for these patients (17):

The most common aim for women seeking PCOS treatment is to induce ovulation for conception.  Reducing androgen levels, treatment of acne and hirsutism, and reducing body weight are short to medium-term goals. Long-term goals are to minimize the health risks of diabetes mellitus, cardiovascular disease, and endometrial cancer (27).

To achieve effective management for PCOS and reduction of clinical complications requires prolonged and often life-long compliance with multiple prescribed drugs and changes in lifestyle. Patients report prolonged periods of treatment and side effects of drug therapy as the most common reason for withdrawal from treatment (28).

See the five-part educational videos below to help you understand ovarian cysts and available treatment options.

Simple solutions to a complex problem?

Around 200 A.D. China, a book on herbal medicine called Shang Han Lun was published. This book is one of the oldest complete clinical textbooks in the world and its application to the treatment of disease is still regarded as having great relevance in today’s environment (29). One formula from that book sits at the heart of PCOS treatment for patients using herbal medicine.

Studies indicate that this central PCOS formula contains herbs that have shown hepatoprotective effects, as well as beneficial effects in the treatment of hyperglycemia, insulin intolerance, dyslipidemia, and anovulation (30). Researchers theorize these ingredients increase the insulin sensitivity of patients with PCOS, and reducing inflammation and oxidative stress reaction is the possible mechanism for the therapy to improve insulin resistance and increase insulin sensitivity (31).

Specific markers known to assist with the management of PCOS symptoms have been indicated in these studies, however, studies on measured benefits or outcomes for PCOS patients are hard to find. Possibly the fact the formula and treatment for PCOS in China have remained ongoing for the last 1800 years they feel the benefits are already known, and only the mechanism of action requires scientific inquiry.

The formulation we offer you here includes the core formulation so popular in the east, along with other ingredients traditionally used as treatments for PCOS. Due to the lack of specific publications to reference or satisfy scientific inquiry in any meaningful way, that after 1800 years of use, and the most popular treatment for PCOS in the east, further pharmacological investigations, and clinical trials should be developed on the basis of the present findings.

To conclude, until modern trials are done to validate the efficacy and use of these botanical ingredients for PCOS symptoms, the conclusion must be that there is no scientific evidence to support or promote their use. 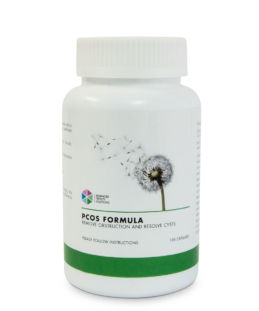 We proudly support the PCOS Challenge

PCOS Challenge: The National Polycystic Ovary Syndrome Association is the leading nonprofit patient support and advocacy organization globally that is advancing the cause for women and girls with PCOS serving over 52,000 members.

We support their mission to raise public awareness about PCOS and help girls and women with the condition overcome their symptoms and reduce their risk for life-threatening related diseases such as diabetes, cardiovascular disease and cancer.

This formula is a natural, safe and surgery free way to resolve PolyCystic Ovaries, excess male body hair, and hormone imbalances. Our formula gently dissolves all cysts up to 2″  (5 cm in diameter ) within a matter of months.

How do you know the formula is working?

Are you trying to understand what a Low AMH diagnosis means for you? Dr. Scott Martin leads the team for Advanced Fertility Solutions formulas. He has been solving the Low AMH riddle since 2010 and is now available globally for Personal Consultations. In this time you will discuss test results, medical and lifestyle history. By the end of your consultation you will have insight and a treatment plan to help put you in control of your fertility journey.